telegram.com “The DESE reports that more than 400,000 children statewide qualify for free or reduced-price meals at school.” 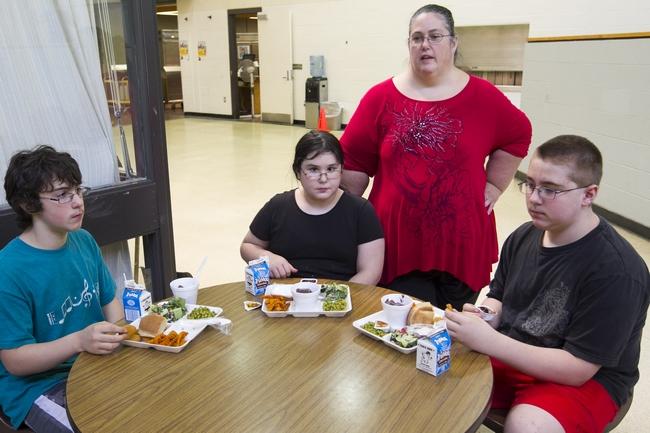 WEBSTER – For the thousands of low-income families across the state who struggle to put food on the table, their children’s access to nutritious meals often ends with school summer break.
A single mother of four, Lisa Franks, says higher grocery bills during the summer months are tough to handle. Yet, she said, “my kids don’t go without, they never have. I find a way.”
That way is a federally funded summer meals program that feeds qualified children 18 and younger when school is out.
Ms. Franks’ children were among more than 60,000 in line this summer to receive a free meal at one of the 900 or so Summer Food Service Program sites in Massachusetts.
The U.S. Department of Agriculture program is administered by the state Department of Elementary and Secondary Education with support from Project Bread, a nonprofit dedicated to feeding the hungry.
The DESE reports that more than 400,000 children statewide qualify for free or reduced-price meals at school.
When parents and guardians rely on school meals to ensure their child receives adequate nutrition, the summer months pose challenges.
Depending on the location, the program fills stomachs during some or all the summer weeks with nutritious meals in a safe environment.
Ms. Franks’ children, ages 10 to 18, were found eating lunch recently in the cafeteria at Bartlett High School, a meal site in Webster.
“I love this program and my kids like it, too,” Ms. Franks said of her children.
She praised the variety of foods offered and her children’s ability to make some choices.
Sitting apart from the main group in the cafeteria that day, a young mother was watching her elementary-school-aged son eat.
“We’re grateful for the program. Without it, we’d be lost,” said the mother, who asked not to be identified.
Samantha Bennett, child nutrition outreach community relations coordinator for Project Bread, said nearly 60,000 children statewide were served a meal on an average day last summer.
“One of our biggest challenges remains making sure every child who needs a meal knows where they can find one, wherever they are in Massachusetts,” Ashley Krebs, DESE director of the Child Nutrition Outreach Program, said in a press release. “We are working with local resources in every community to help inform people where the summer food program sites are located and how children can get to the sites.”
The 68 public meal sites in Worcester County include 35 in Worcester, 14 in Fitchburg, seven in Leominster and four in Southbridge.
Nonpublic sites are at membership-based organizations, such as the Boys & Girls Club of Webster-Dudley in Dudley.
While the program at Bartlett finished last week, the majority of meal sites run through late August and a few continue into the first week of September.
The DESE’s Child Nutrition Outreach Program, administered by Project Bread, helps develop the meal sites in communities where 50 percent or more students qualify for free or reduced-price lunch at school, or the majority of residents live at or below the federal poverty level.
As an example, the Federal Eligibility Income Chart says children in a family of four earning an annual income of $31,525 or less are qualified to receive a free lunch at school. Those in the same-size family earning $44,863 or less qualify for a reduced-price lunch.
In the Webster public schools, high school lunch is $2.50 and $2 at the middle and elementary schools. Reduced-price lunches are 40 cents.
Of the 1,183 students enrolled in Webster schools, 44 percent qualify for the school lunch and summer meal program.
Ms. Bennett said the Bartlett site last summer served an average of 249 kids per day, for a total of 11,506 meals.
This year, Project Bread awarded more than $100,000 in grants to 38 communities with sites in a variety of settings such as a school, park, camp or library.
“There is no one-size-fits-all solution to hunger,” said Project Bread Executive Director Ellen Parker. “Our grants help community stakeholders expand and grow their efforts to best reach hungry children where they live, learn and play.”
While Ms. Franks was shuttling her children to Bartlett for a midday meal on July 28, her U.S. congressman, James P. McGovern, D-Worcester, was in Washington, D.C., delivering a speech on the House floor to garner support for the USDA’s Summer Food Service program.
“We need to ensure that all students who are eligible for school meals have access to free summer meals, and that states and local communities have the funding and resources they need to reach all eligible children,” he said.
The congressman had just returned from his second annual Summer Food Rocks Tour, where federal, state and local officials joined Mr. McGovern in serving food to children at meal sites in this 2nd Congressional District.
“A child’s need for healthy, nutritious food doesn’t just end when the school year does,” he said in a tour press release.
The tour to raise program awareness began in Ware and made stops in Orange and Leominster before ending in his hometown of Worcester.
Project Bread is a nonprofit organization established in 1987 with a mission to eradicate hunger for people of all ages. Its primary fundraiser, Walk for Hunger, raised more than $3 million in May, which is used to fund more than 400 programs in 120 communities statewide.
Project Bread offers a Food Source Hotline, 800-645-8333, to help families in need when the meal sites are not operating. Counselors identify as many food resources as possible in the caller’s area to help put food on their table.
For a complete list of summer meal sites statewide, visit www.meals4kids.org/summer-meals.
___________________________________________________________

One young child and her five brothers and sisters did not expect any presents this year. They did not have a Christmas tree and were used to doing without.

But thanks to the Telegram & Gazette Santa Fund and the Spanish American Center in Leominster, those children did receive toys this Christmas.

Enoelia Munoz, director of domestic violence prevention at the center, said the family of six is one of 85 families — and more than 200 children — who received toys from the center this year.

“This mother is a victim of domestic violence,” Ms. Munoz said. “She is very, very needy. She’s behind on all her bills and has no income. She can’t find a job and has no transportation to get a job. There’s no way she could afford any toys for her children. She was so grateful to be able to give her children toys. We tried to find a Christmas tree for her, but we couldn’t. Thanks to the T&G Santa, at least they had toys this year.”

The staff and volunteers unloaded boxes of toys from the T&G Santa and sorted them according to age. Each child received three toys, a ball, a backpack, a reading book, coloring book and crayons.

“Without the Gazette Santa, there would be no toys for these children,” Ms. Munoz said. “Most of them have nothing. It is very, very sad and getting worse.”

In some cases, a battered woman takes her children and leaves her situation, arriving at the center with nothing but the clothes they are wearing.

Ms. Munoz has worked at the center for 27 years and said, “I’ve seen it all. The domestic violence caseload is getting larger. There are more homeless people. They lose their jobs, then lose their homes. They can’t afford a car, which makes it difficult to find a job. This could happen to any of us.”

She said in some cases, the frustration overflows into domestic violence.

The center has offered hope to women of all backgrounds in North Central Massachusetts since 1966. It is a private, non-profit organization founded by Catholic clergy to benefit the Hispanic community in greater Leominster, and has been affiliated with the Montachusett Opportunity council since 1974.

The staff works to find safe shelter for battered women and provides after-school programs for students. There are also programs to reduce isolation for elders, English-as-a-second-language classes, counseling, referrals and advocacy.

The center also works with the Worcester County Food Bank, besides donations, to keep a food pantry open.

“We cooked a meal for the homeless on Christmas eve,” she said. “A lot of children who came received toys from the T&G Santa. We appreciate all the help. The toys make life better for children. The parents are so grateful and the children are so happy. Thank you.”

In its 75th year, the T&G Santa Fund collects thousands of donations from generous readers and area residents to help buy toys for children in need in Central Massachusetts. Children 12 and younger who would otherwise not receive any holiday gifts are eligible to receive at least two toys each. No applications will be accepted directly by the T&G.