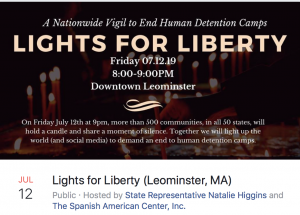 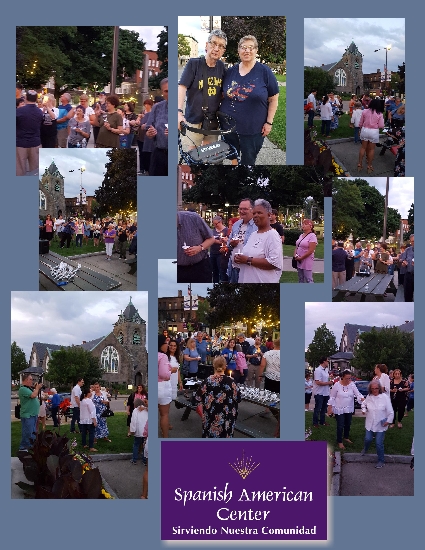 LEOMINSTER — In a downtown bathed by candlelight on Friday night, local immigration attorney Nicolas Formaggia explained why his clients had fled Central America:

It’s because their family members had been murdered, or disappeared, he said.

Formaggia was one of several speakers at “Lights for Liberty,” one of 70 similar events taking place around the country simultaneously. Organizers said the vigil was held protest of the conditions at migrant detention centers. The event was held less than 48 hours before immigration raids planned in nine U.S. cities on Sunday by U.S. Immigration and Customs Enforcement.

“None of this is acceptable,” Formaggia shortly before the vigil started, referring to the conditions inside border detention facilities. “Treating children the way we are treating them — it’s unacceptable. It’s shameful. It’s criminal. So, if we are willing to allow this to happen and stand by without raising our voices, then we are done because everything that we stand for is wrong.”

The vigil was co-hosted by Higgins’ office and the Spanish American Center.

Formaggia, in his remarks, conceded that he, like many critics, was skeptical of conditions that many migrants from countries like Guatemala and El Salvador faced.

Then he heard their stories.

“People are not running away from being poor,” Formaggia said of migrants crossing the U.S.-Mexico border. “They run away so that they can save their lives, and their children’s lives.”

The mood at the vigil was somber as the various speakers detailed why they believed the controversial facilities should be either revamped or closed completely. Occasionally, audience members clapped, but otherwise, the night was quiet.

Leominster resident Mary Marotta shares why she believes it was important for Leominster to host a vigil for migrant detention centers. (Monica Busch / Sentinel & Enterprise)

About 40 minutes into the evening, candles were distributed and set alight. A prayer, led by Cormier, gave way to a moment of silence. The event was set to wrap up shortly thereafter, but when several audience members began to sing a rendition of ‘This Little Light of Mine,’ the crowd hung around a few moments longer. Joining in with the impromptu chorus, participants hummed and sang together before ultimately blowing out their candles and dispersing into the humid night.